This past Monday, President Biden represented the United States at the UN Climate Change Conference (also known as COP26) in Glasgow, Scotland. His presence was a major difference from just a year ago when the White House was occupied by a man who claimed that climate change was a hoax perpetrated by the Chinese to destroy America’s economy. Biden did not waste the opportunity to make the point that not only was the US back at the table after pulling out of the Paris Climate Accords, but it was also back with action and not just words.

Biden also gave a lot of airtime to promoting his Build Back Better agenda. But one of the most powerful things we at Circular Philadelphia heard, as reported in Politico, was this line:

​​“Climate change is already ravaging the world,” he said. “It’s not a hypothetical threat. It’s destroying people’s lives and livelihoods, and doing it every single day.”

What was so striking about this line, aside from the obvious fact of acknowledging the climate crisis not as a hypothetical, was the focus on people’s livelihoods. While we may not be able to reverse climate change and return to a pre-industrial global ecosystem, what Biden is saying here is something we believe wholeheartedly at Circular Philadelphia. Too often, the message of sustainability is saddled with the weight of scarcity, as if the only way to stop climate change is for everyone to return to a pre-industrial life.

Few people want to give up 21st century comforts like indoor heating and modern transportation. But in Philadelphia, with its 24% poverty rate, telling those who are trying to escape poverty by starting a business or becoming a first-generation college student to limit themselves or go without is a non-starter. 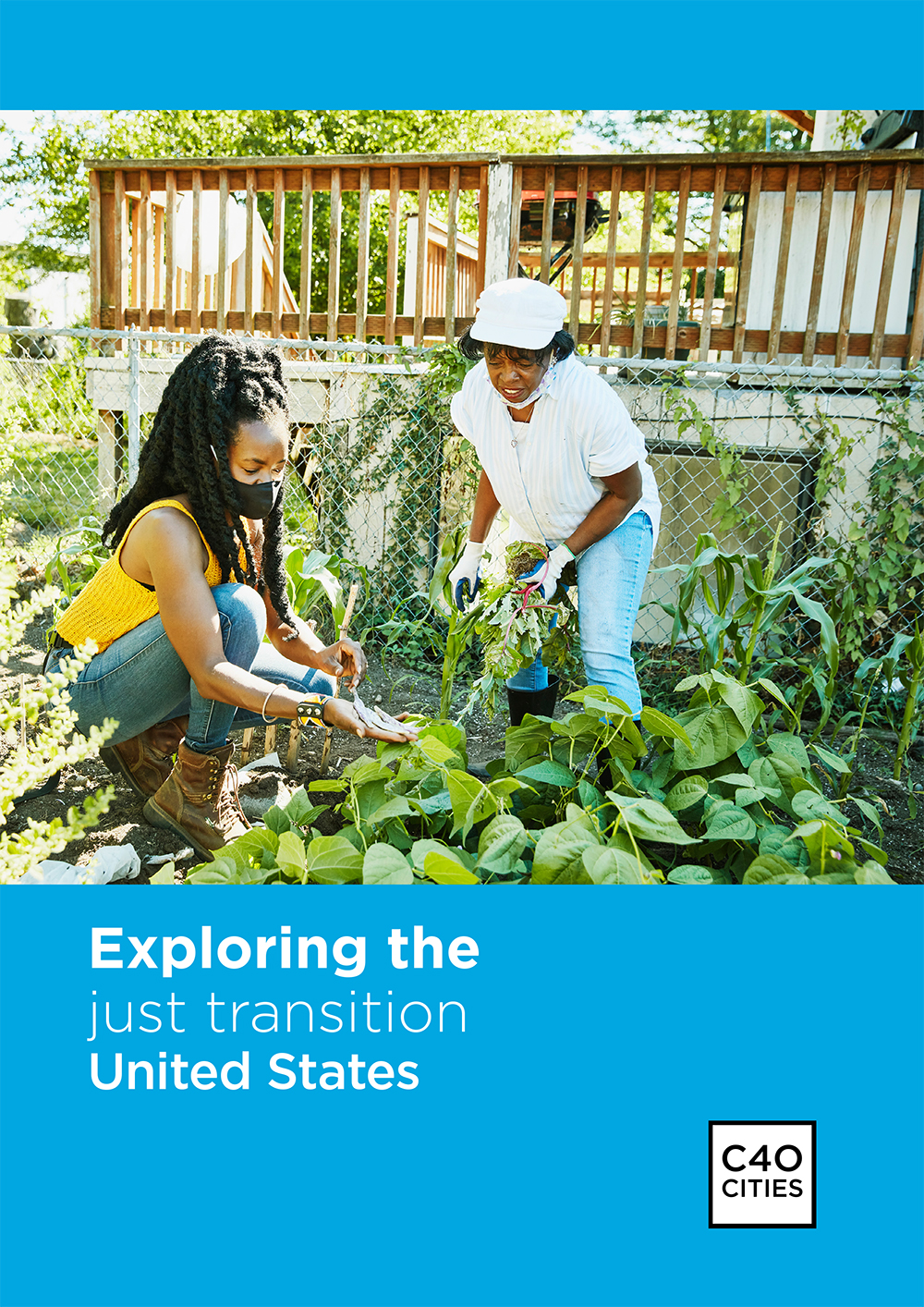 What Biden is calling attention to is directly connected to the circular economy and most timely, to a recent paper on the Just Transition that Circular Philadelphia’s own Nic Esposito co-authored with Sylvie Gallier Howard of Equitable Cities Consulting (an organizational founding member of Circular Philadelphia). This paper was commissioned by the global climate organization C40, a network of the world’s megacities committed to addressing climate change, and released in the run up to COP26.

The concept of the just transition has its origins in the labor movement. As major polluting industries like coal fired power plants and combustion engine automobiles are phased out for more sustainable options like renewable energy and electric cars, labor union leaders teamed up with the sustainability movement to demand that these transitions also plan for the needs of workers, such as re-training programs and ensured liveable wages in these emerging sustainable industries.

But as both C40 and Biden’s Build Back Better agenda acknowledge, the just transition is not just about worker reskilling and ensuring liveable wages, although those needs are still a major part. For a just transition to be successful, we must rethink the entire economy from how we take care of and educate our children, to how we access healthcare, to how we can equitably share and reuse the finite resources on this planet so that everyone can live a thriving existence where they meet their full potential.

Equitable Cities has an in-depth blog on their website with a deeper synopsis of the paper, so please check it out. And please also check out the C40 Knowledge base that houses the US Just Transition paper as well as papers from South Africa and Europe.

For this post, Circular Philadelphia wanted to endorse that a just transition needs a circular economy. The common theme throughout these papers is that the industrial economy of the 20th century could be summed up in one word–extractive. It extracted resources out of our earth at an unsustainable pace. It extracted wealth out of our communities through multinational corporate fueled consumption. And it extracted the potential out of our labor force by buying their labor without an adequate return on investment for the workers or their families.

Just like it’s not worth being rich on this planet if we destroy it, we also can’t accept a trade-off of saving the planet while maintaining the level of inequity we see both globally and within our own communities. It’s time for economies around the world to stop extracting from our planet and people and instead start using the concept of circularity to start putting potential back into the earth and our communities.

And who knows? We may even be able to shut down the landfills and incinerators while we do it and use a just transition to put people to work in industries that are a better deal for everyone.