Last Thursday, Philadelphia’s Office of the Controller released a report on a topic that Philadelphians have become all too familiar with during the pandemic—the Streets Department’s chronic delays in picking up trash and recycling. The report highlights systemic delays in trash pickups that existed before the pandemic as well as how the pandemic exposed and exacerbated these systemic flaws in Philadelphia’s sanitation system. This led to an on-time trash and recycling pick-up rate that plummeted to just 53% in fiscal year 2021 (July 2020 to June 2021).

A Failing System That Predates the Pandemic

None of this is news to Philadelphians who lived through weeks upon weeks of stepping outside their front door only to be greeted by piles of festering garbage during the summer of 2020. But what is shocking and completely unacceptable are the disparities between service levels in different sanitation districts. The map below (left) shows how residents of Center City and districts to the north (including Northern Liberties and Fishtown) continued to have on-time pickup rates well above the citywide average in FY21. 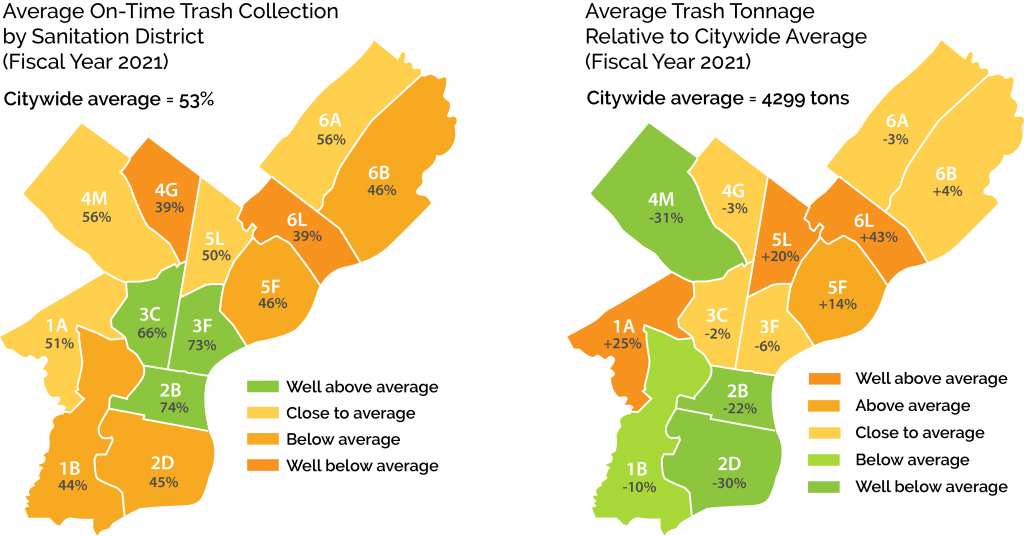 The other important point that the report revealed is that on-time collection was already a problem well before the pandemic began.  On-time collection rates fell in 2014 and never fully recovered. While this may have been caused initially by a compactor truck shortage, which was attributed to the fallout of deferred replacement during the Great Recession, the continued problems with on-time collection after the Streets Department resolved the compactor shortage cannot be attributed solely to increases in trash tonnage. In 2019, collection tonnages were just shy of 2009 levels, while on-time collection had dropped from 97% in 2009 to 83% in 2019.

So what’s really going on?

The failure to meet on-time collection targets even after the City had resolved its compactor issue points to something else that’s beyond just an increase in trash tonnages due to the pandemic. This report shows that systemic problems in how the City manages its waste and recycling are to blame for its chronic failure to pick up trash and recycling properly. The deficiencies in the City’s system existed prior to the pandemic, and they have only become more obvious in the last 20 months. The flaws, on full display in the Controller’s report’s findings, reflect a lack of leadership, a failure to plan for operational disruptions, and a refusal to embrace technology to better respond to logistical challenges.

And while what the Controller’s Report outlines is bad, it’s probably even worse.

The report addresses on-time collection, but it doesn’t dive deeper into an analysis of how long trash was left to fester at the curb in some neighborhoods compared to others or how trash and recycling was ultimately collected when it was finally picked up. During the pandemic, we have repeatedly seen and heard accounts of trash and recycling being combined throughout Philadelphia neighborhoods for weeks on end.  This has continued well into 2021.

Aside from the fact that the City is required by state law to collect trash and recycling separately, the combination of the two by the Streets Department is demoralizing to residents who spend their time cleaning and separating recycling from trash, and it undermines the City’s claims that becoming a zero waste city is a priority. It also hurts resident participation in Philadelphia’s recycling program, as individuals (justifiably so) adopt the attitude that making the extra effort to recycle doesn’t matter if the City is just going to combine it with their trash anyway.

We thank the Controller’s Office for digging into this data and hope it is just the beginning of a deeper dive into the Streets Department’s sanitation operations. Philadelphians deserve to know more about how the Streets Department sets priorities, ensures separate trash and recycling collection, manages operational disruptions, and spends its budget. We believe that further scrutiny and transparency can only serve to ensure that Streets provides reliable, equitable and sustainable waste collection for all Philadelphia residents.

Previous Post: « A Just Transition Needs a Circular Economy
Next Post: Need something repaired? We’ve got you covered. »